We use cookies to optimise site functionality and give you the best possible experience. 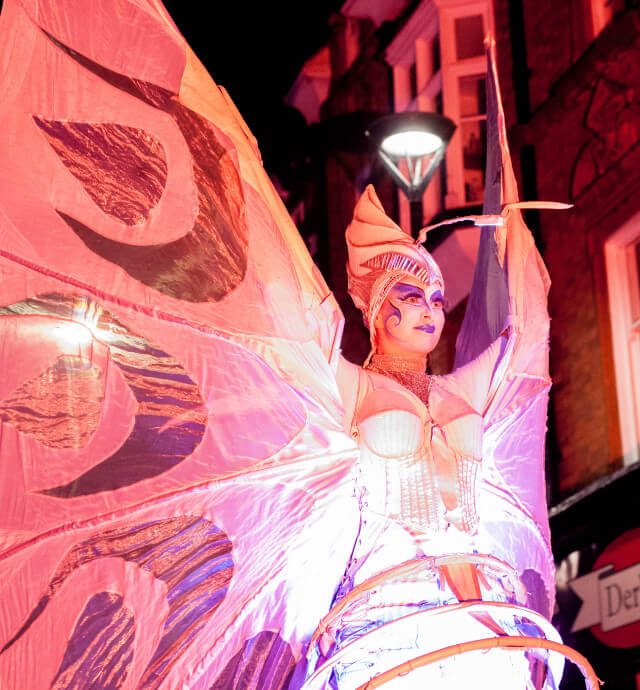 Each year, through Derby Festé we reach out to a variety of community groups.

2020 saw us deliver Derby Well in place of Derby Festé. We delivered a programme of art and culture in the city but in a socially distances way using shop windows, street art, and online engagement activities. We worked with local community groups to produce beautiful works representing people's lockdown experiences.

2019 saw us deliver ‘One Moon’ which had a special educational needs and disability focus, attempting to bridge work which was already taking place in City SEND Schools as part of This is Derby (Essential Life Skills) and SPLASH (ACE Strategic Touring).

The project, One Moon, was created around the Museum of the Moon by Luke Jerram being presented in Derby Cathedral and also work within the Derby Festé 2019 theming of Space, Moon and Tides. Hubbub Theatre created a performance accompanied by live music underneath the Museum of the Moon . Then a physical link of over 200 people was made between the Museum of the Moon and the River Derwent where it flows through Cathedral Green. The link had two elements connecting the Moon to the River – people and the passing of a biodegradable Moon. One Moon reminds us that, no matter who we are and where we come from, we live together as human beings on one planet under One Moon. We are all inter-connected.

550 – 600 people watched or participated in the One Moon event (numbers estimated by capacity of Cathedral). Of the 134 Festé attenders interviewed who came to One Moon, 41 had never been to Festé before. The Facebook event for One Moon reached 27.7k people, with 1.4k responses.

For Derby Festé 2018 we worked with Ukrainian, Bosnian, West Indian and Indian community centers as well as at four local schools.

I have never done this (one moon) before, I was cold but I did my best! I worked hard and was a professional. I would like to do it again.

Derby Festé has run every year during the last weekend in September since 2007. The festival attracts in the region of 30,000 people into the city, generates more than £800,000 a year for local economy and raises Derby’s profile as a festival city – showcasing the talents within the city’s cultural organisations, attracting visitors to the area and having a positive economic impact on the city. Its ambitious objectives are:

Get involved with Derby Well in autumn 2020!

Become a corporate sponsor and help Déda make Derby a better place to live work and visit. We can tailor packages to suit your needs.