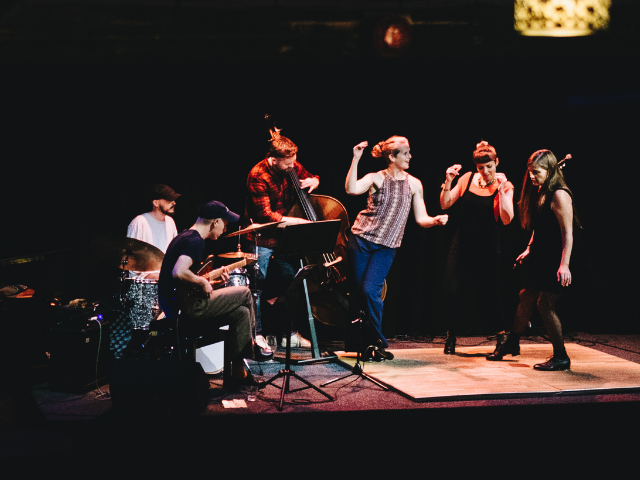 This show does not exist.

About the Tap Rhythm Project

'In our performances, tap dance is both a musical instrument, and an energetic, highly physical and dynamic embodiment of the music. We blend aspects of the jazz tradition with innovative approaches to new music and choreography to amaze and inspire audiences across generations.'

Jess is known in the UK for her work as a tap dance performer and tap jam host (Tap Rhythm Project, London Tap Jam, Tap Dance Festival UK). Her inspiration comes from ‘Hoofing’, which places musicality, improvisation and self-expression at the heart of the tap dancer's craft. Jess has undertaken specialist tap dance training in Berlin, Barcelona and New York with many leading exponents of the art form. As a guest soloist tap dance improviser, Jess has appeared twice at the Purcell Rooms as part of London Jazz Festival with Heather Cornell and Andy Milne and Bandwidth in Finding Synaesthesia (2007) and again with Andrew Nemr and Ademola Junior Laniyan as part of the Michele Drees Jazz Tap Project (2013) with whom she also performed at Ronnie Scotts Jazz Club (2010).

Leading UK tap artist Ademola Junior Laniyan has performed at London’s Royal Albert Hall with the recording artist Robbie Williams; Canadian Tap Pioneer Heather Cornell in Finding Synesthesia for both the London and Salzberg Jazz Festivals and in The Purcell Room for Out of the Blues with his tap Mentor Tobias Tak. His credits outside the UK include improvised tap solos in both Riverdance (European and Asian tours) as well as Los Sones Negros for Suma Flamenca (Spain) with Flamenco legend Juan de Juan, La Serena Festival Internacional de Jazz (Chile) with Chilean jazz trumpet legend Cristián Cuturrufo, and the Ernesto Nazareth Chorinho Festival (Brazil) as part of the Michele Drees Jazz Tap Project.

Joe is a performer, composer and teacher specialising in jazz and improvised music. Since graduating from the jazz degree course at Leeds College of Music in 2016, Joe has also performed and released music as a solo artist and achieved national radio play. As a member of Major Ruse, Joe has performed across the UK at festivals, events and venues including the Manchester Jazz Festival, Love Supreme, We Out Here and Camden’s Jazz Café as well as receiving national radio play and performing live on BBC6 Music.

As an instrumentalist, composer, and producer Andy has toured the globe and was nominated for Best Production at the 2014 Vimeo Awards in New York. He is a resident artist with Origamibiro at Denovali Records in Berlin. He currently plays with Grammy nominated singer songwriter Zoe Johnston and rising star of the folk scene Katie Spencer.

The combination of rhythm tap and live music is fantastic. Jess and the band encourage dancers and non dancers alike to dance and experience the joy of tap improvisation to live music. It's great to get up and dance or simply to watch.”

"It’s a totally unique experience, where participants and spectators alike are warmly welcomed, with a true ability mix from novice through to professional. Highly recommended.”

“The Tap Rhythm Project Tap Jam has been the perfect opportunity for me to "find my feet" when improvising tap dance. Everyone is incredibly supportive of one another and dancers of all level and experience are made welcome."